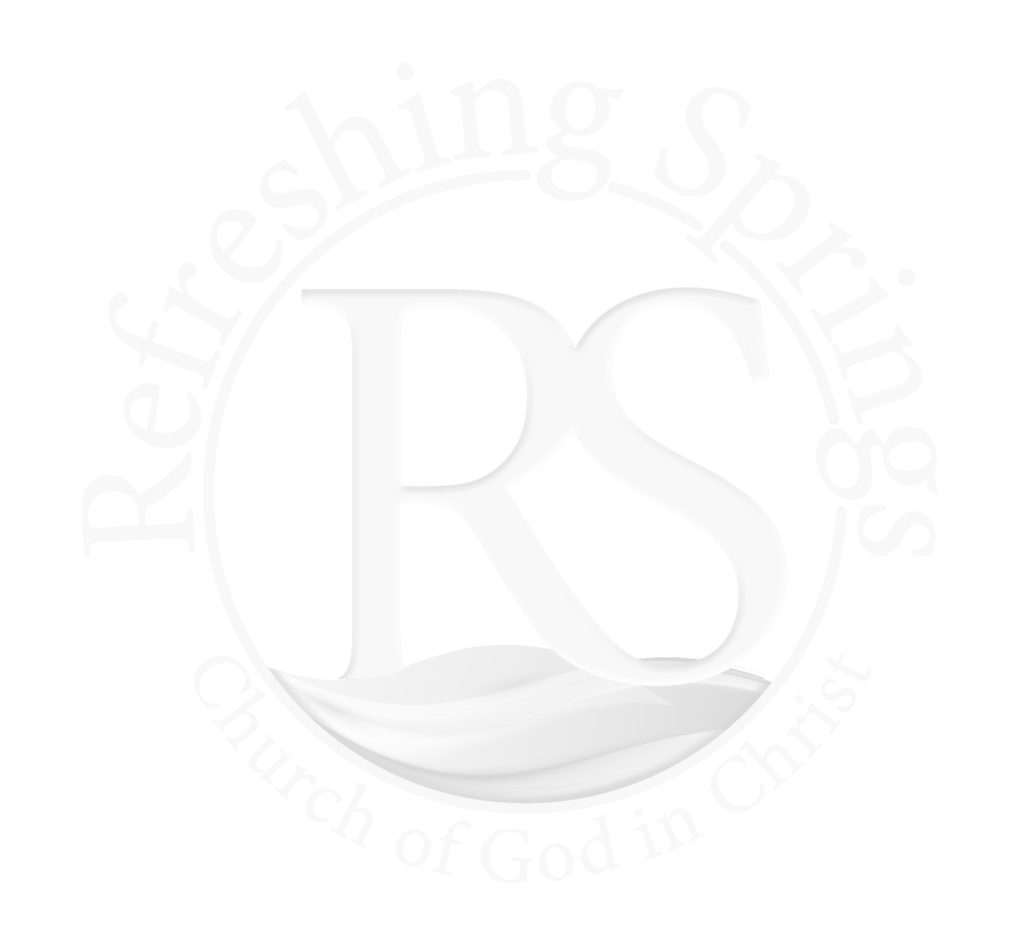 Prior to establishing Refreshing Springs Church of God in Christ, Pastor Jones worked as a Medical Administrative Officer for the Department of Veterans Affairs. This career allowed him to live in five different states. Each move advanced his career, as well as expanded his vision of ministry in so many different worship experiences. Pastor Jones was destined to relocate to Dallas, Texas in May 1994. It was here that God gave him directions to establish Refreshing Springs Church of God in Christ, August 1, 1996. Pastor was led to move the church under the leadership of Texas Northeast Third Jurisdiction (the late Bishop F. W. Smith). He later served under Bishop T. W. Johnson and, served as 2nd Administrative Assistant under the leadership of Bishop Nelson Gatlin.

The church has grown tremendously since its inception and Pastor Jones determined that it was time to devote all of his time to ministry. He therefore retired from the Department of veterans Affairs after 33 years of federal service. Pastor Jones was appointed to the position of District Superintendent in October 2011. There he serves as Superintendent of the Refreshing Springs District. In early 2016, Superintendent Jones was led to move the church into the newly formed Texas North Central Jurisdiction, under the leadership of Bishop Robert L. Sample. There he serves as 1st Administrative Assistant to the Bishop.

Academically, Pastor Jones received a Bachelor of Science Degree in Education, from American Technological University in Killeen, Texas. He has earned a Masters of Theology and Doctor of Divinity degrees from American International Bible Institute & Seminary of Waco, Texas. Pastor Jones is married to Missionary Ruby L. Jones and they share lives with their children, Gerald II, Anthony, Lamond, Stephanie, and four grandchildren.

My personal Testimony: I consider it an honor and a privilege to serve as Founder and Pastor of this great church. What an awesome God we serve, that He thinks so much of us to stand before His people and expound upon His truths, that souls may be saved. The Gospel we preach, the lessons we teach and the souls we reach, is not about us. It’s all about HIM.

We extend to each of you a special invitation to come and experience the Refreshing of the Lord at the SPRINGS. Let God manifest Himself in your life. You simply need to write the vision and make it plain, though it tarry, wait for it; because if will surely come.

She has served beside her husband in many different capacities as the church has grown from infancy to our present membership. Some of those capacities were as member of the Sanctuary Choir, Praise Team and Youth Sunday School Teacher.

As President of the Women’s Department, First Lady Jones recognized the importance of “Women Encouraging Women”. She therefore initiated the women’s mentoring program which provides mature mentors/role models for the young women of the church.

The goal is to train and encourage our young women to love God, to love their families, to love their church and to love themselves. Then there are the “Secret Pals” who provide anonymous gifts, cards and words of encouragement at any time when it’s least expected.

Many years ago, First Lady Jones witnessed many indignities suffered by elderly residents in nursing homes. Many residents sat uncovered for long hours without regard for their bodies being properly covered. She therefore initiated the “Dignity Project”, which provides lap blankets and scarves (many she crochets herself) that donate to nursing homes. First Lady Jones is the involved mother of their four adult children, and four grandchildren.

The Biography of Mother Lois Jones-Lee

Dr. Lois Jones-Lee is one of the founding members of Refreshing Springs Church of God in Christ and has unselfishly shared her talents and time to the growth and development of the ministry since its inception.

As a product of the Church of God in Christ, she has served in many capacities, and currently serves as church mother, trustee board member, prayer warrior, teacher and church financial secretary.

Strength and honour are her clothing, and she shall rejoice in time to come. She openeth her mouth with wisdom and in her tongue is the law of kindness. Proverbs 31:25-26 She earned and received her Doctorate Degree in Theology from American International Bible Institute & Seminary Waco/Killeen, TX, and is a former student of Southern Bible Institute Dallas, TX.

Mother Lee is the mother of one and grandmother of two, and is a retired Registered Nurse from Baylor Medical Center of Dallas, Texas.

The Refreshing Springs Church of God in Christ was born out of a Divine unction of the Holy Ghost. Pastor Jones knew that his call was to pastor God’s people. However, it wasn’t until May of 1996, during a revival service that the Lord released him to go begin the ministry and “to build the Lord a house.” The first official meeting was conducted on August 1, 1996 in the home of Elder and Sister Gerald W. Jones, Sr. Services were held in the pastor’s house for four weeks. The Lord then blessed the church to move into a renovated Laundromat/storefront on Sunday, September 1, 1996. The Refreshing Springs C.O.G.I.C. had now become a functional church. The original members of this new church where Pastor and Sister Jones, their four children (Wayne, Anthony, Lamond and Stephanie), Mother Lois Lee and her daughter and son in law (Anthony and Natasha Allen) and our children’s friend, Tim Gant.

From the very beginning, Refreshing Springs Church was God ordained and destined to thrive and thrive it has. God has been and always will be the central focus of this ministry. Pastor Jones determined early that, “God, this is Your church, and we’re giving it back to you. Whatever You do is alright with us.” God has moved this church forward by leaps and bounds. Within two and a half years, the church had purchased 4.7 acres of land and had been approved for a quarter of a million dollar construction loan. Building the Lord a house proved to not be a simple task. There were major struggles with the city interference, but God encouraged us through scripture. He reminded us that “if this is not of God, it will come to naught, but if it be of God, you can’t stop it.” The work was and is of God and with the help of God, we did prevail.

The new church was completed and dedicated in March of 2000. Dedication speakers were Bishop Frank W. Smith. The Lord blessed us in a mighty way. The church grew and flourished. This 20 year construction loan was paid off in six and a half years. The Lord continued to expand our territory. A $450,000 expansion, which included a new sanctuary, offices, and additional class rooms, enlarged fellowship hall and a game room & exercise room was completed and dedicated on December 16, 2007. The Lord blessed Refreshing Springs to pay the expansion loan in full August of 2013 and Superintendent Melton Timmons assisted in the Mortgage Burning Ceremony.

Since its inception, God has not allowed the ministry to be confined to this neighborhood nor to this city. But, He has ordained a ministry beyond the walls. We must go into the highways and hedges and compel men and women to “come over here, the feast of the Lord is going on.” Pastor Jones therefore challenged every auxiliary, to minister beyond the walls of this church. Each auxiliary must report of their ministering during church business meetings. Evidence of our “Ministry Beyond the Walls” is clearly reflected in the activation of our bus ministry which reaches into a number of communities, transporting members and non members to the house of the worship.

Ministry Beyond the Walls is further evidenced in our participation and contributions to Smile Train (an organization that performs surgery on babies born with facial disfigurements), contributions to National Feed the Children Program, donations to Haiti Earthquake relief through COGIC Charities, contributions to Medical Mission to Africa, where 138 surgeries were performed and over 2000 total patients were treated. The homeless in the Dallas area are also being fed. God truly has taken the little and turned it into much in the Master’s hand. But God is not through blessing us. There is so much still left to do. God has now positioned us for greater ministry. As our forefathers sang, “I believe I’ll run on and see what the end’s gonna be.” This church does belong to God and we look with great anticipation where God will take us. I am in agreement with Bishop Charles Blake: “Refreshing Springs, I see you in the future, and you look much better than you do right now.”